Project title: Investigation into auto levelling systems for a caravan

This project focused research on self-levelling platforms to aid with the design and testing of a system to automatically level a caravan, two separate modules were prototyped named “Tilt sense”and “Tilt rectification” key components used in the design is an ADXL 335 accelerometer interfaced with a microcontroller to measure tilt angle and small 5v stepper motors interfaced with a separate microcontroller to operate 3D printed linear jacks, both microcontrollers were hardwired together to form an RS232 communications link where they can talk to each other in turn making it easier to upgrade to Bluetooth in the future.

A test bench was constructed with data collected from commonly found items in a kitchen to determine at what angle they would fall off or slide off with result being analysed, the same test bench was used to determine the accuracy of the Tilt sense module with trigonometry being one method used for comparison.

Lego technics was used to create a caravan chassis and the Tilt sense prototype PCB along with the Tilt rectification breadboard were mounted to it, testing of the whole system was conducted which although worked concluded in several bugs being found.

Further work includes rectifying the bugs to get better performance from the system, investigation into power control for suitable motors to lift a full-sized caravan, interfacing and implementing Bluetooth as well as writing a better user interface. A version 2 of the Tilt sense module has begun resulting in an overall size reduction of approximately 1/5th of the version 1. 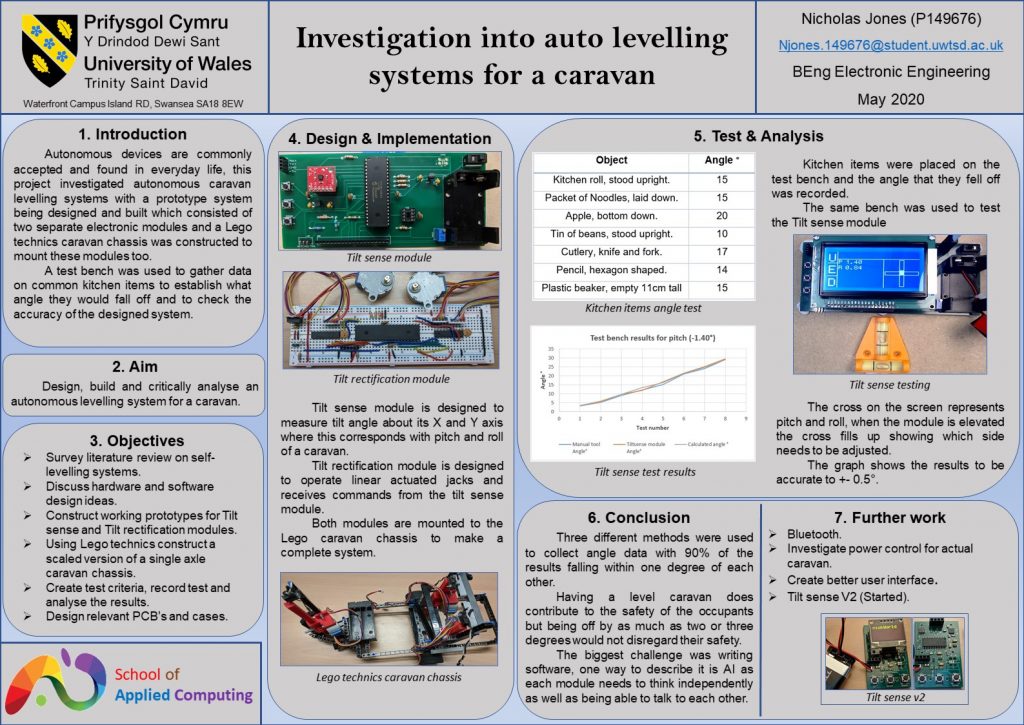